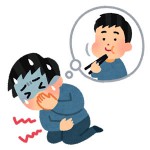 It is a symptom that was said to be heartburn or acid reflux, and stomach acid flows back toward the esophagus.
Because the gastric juice is strongly acidic, when it flows back to the esophagus, the mucous membrane of the esophagus is stimulated and the mucous membrane of the esophagus becomes swollen, and the ulcer can be done.
Specific symptoms include heartburn after meals, belch (burp), and sour and bitter things in the throat.  Reflux esophagitis was considered to be more likely to occur in the elderly, but it seems to have increased to the young person recently. 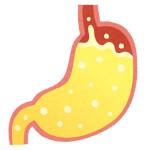 The causes of reflux esophagitis include excessive gastric acid from stress, smoking, high protein diets, high-fat diets, caffeine-intensive ones such as coffee and green tea, and excess stomach acid due to overeating ,etc.

When you eat a fatty diet, a hormone called cholestercytokinin is secreted from the duodenum, loosening the lower esophageal sphincter and increasing stomach acid.

Alcohol also loosens the muscles of the lower esophageal sphincter, making it easier for gastric acid to reflux.

Then, excessive sugar intake causes sugar reflexes, and peristaltic movement stops, resulting in excessive acidity in the stomach, and reflux esophagitis is likely to occur.

And it is thought that it may be caused by over-tightening of the abdomen due to clothing, pressure on the abdomen due to forward bending posture, obesity, constipation, etc., and weakness of the lower esophageal sphincter due to aging.

It is thought that obesity is the cause of reflux esophagitis even in muscular young people.

Basically, it’s about eating good digestion and avoiding binge eating.
In acupuncture, the stomach is in an ischemic state and the appetite is lowered.
But the metabolism does not go up if it is as it is and edema comes out, and the metabolic is used.
Also, if you are frustrated by mental stress, I will try to quell that frustration.

The treatment is in parallel with the improvement of eating habits and lifestyle habits, but the standard is 3 to 6 months.
※ There are individual differences.